– Advertisers can register for the open beta version of the demand-side platform at http://www.splicky.com/register

Sponsormob, one of the leading providers in mobile performance advertising, and Berlin-based Jaduda GmbH, a full-service provider for mobile marketing, present "Splicky" (www.splicky.com), the first mobile demand-side platform (DSP) developed in Germany.
Compared with common RTA systems in the online sector, the algorithms Splicky uses for campaign optimisation differ in the priorities they set in the decision to buy inventory: in particular, technical data points, such as the device model and its operating system, as well as location and time data, are more intelligently weighted, thereby enabling precise addressing of target audiences. With Splicky, advertisers can decide for themselves which sites they want to place their mobile ad media on and can even create campaigns that are designed exclusively for specific mobile devices.

"The transparent purchase of ad spaces on a real-time basis is a matter of constantly increasing relevance in mobile marketing. Above all, the more intelligent weighting of data, such as time and location of actions and the type of device used, opens up completely new possibilities for targeted ad delivery. In addition, our system is the first to satisfy the market’s demands for full transparency," says Jet Patel, Co-Founder & COO of Sponsormob Inc., based in Berlin and Austin/Texas, USA.

Mobile real-time advertising makes it possible for advertisers and agencies to make automated and targeted bids, in real time, on single ad impressions designed specifically for the mobile channel. By way of distinction from real-time advertising in the online channel and the systems most commonly used there, Splicky trades exclusively in ad impressions generated by the users of mobile devices, such as smartphones and tablets. Based on its own proprietary technology, the two Berlin-based companies have created a system that simplifies the mobile advertising market for advertisers, thereby granting them access to a wide range of ad exchanges and sell-side platforms via a single platform. Moreover, Splicky works with mobile-optimised tracking and targeting technology and, in the future, will also look to integrate with the market’s existing third-party tracking solutions.

"The partnership between Sponsormob and Jaduda is based on a shared vision: we believe that the scalable, data-driven and transparent purchase of media will change and shape the mobile advertising market forever. Sponsormob’s performance marketing expertise and Jaduda’s know-how in automated, network-based media purchasing complement each other perfectly. With Splicky, we are striving to take a leading role in Europe’s growing mobile RTA market," says Sven Ruppert, Co-Founder and Director of Sales, Marketing and Business Development at Jaduda, describing the joint project.

Greater transparency and full control, thanks to a self-service system

Thanks to the self-service system, which allows customers to define their own bids, the new Splicky-DSP gives advertisers and agencies full control and highly-scalable technology that adapts to the customer’s needs. Splicky already boasts a large number of inventory partnerships, for example, with Google, MoPub, Mobclix and Nexage. Customers gain detailed insight into their own mobile advertising campaigns through a high degree of pricing transparency, efficiency analyses and reports.

Interested advertisers can register for the DSP’s open beta phase at http://www.splicky.com/register. New technical features will be launched in stages up to September, particularly for targeting, tracking and rich media ads; in addition, there are also firm plans for the introduction of third-party data partnerships.

Splicky is the first mobile demand-side platform (DSP) developed in Germany and is capable of handling over a billion ad impressions per day. A DSP is a trading platform upon which advertisers and media agencies can bid on digital ad spaces for their ad media via a single interface. Thanks to the underlying real-time bidding technology, this booking process runs automatically and in real time. Purchase prices are optimised by the bidding process and reporting is simplified.
Splicky employs special algorithms to drive better results from mobile campaigns and works with tracking and targeting technologies specifically developed for the mobile channel. As a joint project of the two independent, owner-managed companies, Sponsormob and Jaduda, Splicky focuses on long-term partnerships with advertisers and agencies.

Sponsormob is an international CPA network for the mobile web and one of the leading providers in mobile performance advertising, with its headquarters in Berlin with a sales office in Austin, Texas. Thanks to its outstanding technology, the company generates optimal and measurable results for advertisers, agencies and publishers.
The expert team around the CEO and COO, Peter Gläser and Jet Patel, has been working on replacing traditional paid-for display advertising in the mobile domain and on simplifying the market. To this end, the company has used its own tools and technologies for many years.
Sponsormob has already implemented campaigns for the likes of eBay, Axel Springer and the Otto Group. At its foundation in 2006, Sponsormob was the first international CPA network for the mobile internet.

Further information can be found under: http://www.sponsormob.com/de/

Jaduda GmbH is a Berlin-based full-service provider for mobile marketing. The company was founded in early 2010 and provides all services from a single source, beginning with the concept, through the creation of landing pages and banners, right up to the modulation and analysis of complex marketing campaigns in the mobile channel. Jaduda supports advertisers and agencies, with individual solutions to increase their reach, leads or downloads. Jaduda is a premium partner of major global networks, such as Google and airpush, and cooperates closely with international marketing and publishing companies.
Jaduda’s customers include the international media service provider, Publicitas, Tchibo and the Goldbach Media Group.

Further information can be found under: http://www.jadudamobile.com/ 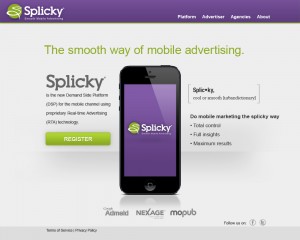