Push the BUTTON! What a flattering experience….

To be honest: When I first heard about flattr, I really didn’t get it. Was was a flattr-button? Another kind of facebook-like-button? How can I spend money there and how do they allocate the money among my flattred things? As you can see, there were a couple of big question marks on my forehead – and I don’t know about you, but if something of minor relevance appears to be too complicated to understand  immediately, I usually lose interest. So I peg flattr as another one of these thousand hopeless attempts to monetize your digital content.

But as everybody knows: you always meet twice in life. And so it was – at the Cebit Global Conferences this year, where Peter Sunde Kolmisoppi spoke about Flattr. (Personal side note: I must admit, I sympathised with Peter at first sight – and for many  good reasons. Albeit it has nothing to do with flattr, the whole business model and so on: I just really like people who use their publicity to fight for animal rights, vegetarianism and against Finnish right wing parties! So Peter, keep it up!) 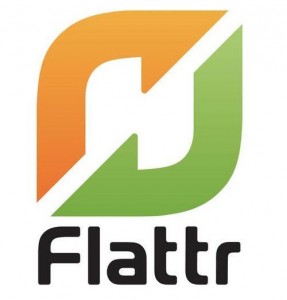 But back to Flattr. What I’ve learned during his keynote at Cebit and re:publica 11: I’m not the only one who didn’t understand the concept of Flattr straightaway. After all, this seems to be one of their main problems when it comes to making flattr more popular, as Peter also pointed out. He admitted that, in the past, they were really good at programming but rather bad at communicating the concept of flattr to the public. A kind of nerdy problem, I guess. Actually, for me, who is working in the communication business, it once again shows that nobody is gonna hear and understand you without a good communication strategy.

By the way, after the release of flattr about a year ago and Peter’s speech at the 10th re:publica, the German blogosphere appeared to have grasped the overall concept of flattr in a flash and used it quite frequently – in contrast to other countries. He obviously met the right people – or possibly just the right multiplicators – there, which is yet another proof of the beneficial results of professional communication. Anyhow, I didn’t attend re:publica 10 and didn’t blog actively at the time.  I just ‚heard’ about it and as I said before, it hadn’t fascinated me that much to get any deeper into the matter.

But after Kolmisoppi’s two ‚live appearances’, – which were by the way very entertaining and witty,- I finally understood the concept, it made me really curious and my colleagues of course noticed that. So they made me a very clever birthday present: a 10 Euro credit for my very own Flattr-account. With no excuses left, I started using Flattr a few days ago. Here are my very first impressions:

The concept! Instead of paying a lot of money for a lot of cheap content published by so called independent journalists sitting on Rupert Murdoch’s lap, you can reward good independent work by giving some money and at least flattr him or her. This is a really nice, forward-thinking thought and so full of independence.

Procedure: Easy handling, everything is explained, e.g. adding money on my account was really easy. (Although I don’t understand why Pay Pal and Visa takes so much money for the transaction. But I guess I can’t blame Flattr for that.)

Conditions: You can change the amount of monthly means (which is the money you want to flattr) every single month. There are no strings attached, as you don’t have a cancellation period. That’s great – like a mobile prepaid card for content.

The list of what I’ve flattred so far: Very useful in order to get a better overview, for example to decide which blog I want to subscribe to (btw – that’s also a great feature).

The elected organisations which get the money in case I don’t flattr my chosen amount in one month: the Red Cross, Doctors without Borders, Blood Cancer Fund, Project Aware (as a diver I really like that one) and Sea Shepherd. (Side note: Where is PETA?)

New features starting in May – Flattr everything: Soon I can flattr whatever I like – that even extends to tweets. Although I’m not sure if it’s a good marketing strategy to flattr content from someone without his/her having an own flattr account. I know their aim is to make flattr more popular but it might be very annoying for someone who is not interested in flattr getting a lot of notifications about money waiting for him. Sounds a little like spam to me. Hopefully there will be a kind of blocking list for everybody who doesn’t want this kind of notifications at all.

– A flattr prepaid card or voucher –  it’s much easier to give it to someone as a birthday present
– PETA should be on the list of alternative beneficiaries
– A flattr-badge to wear (I know, I am a fashion victim)
– More guerilla marketing or PR activities to spread the word

I’m really curious as to how often I will use flattr, if I put a flattr button on my own content, if someone flattr me and if the usage of flattr will change peoples minds about paying for digital content.

You can watch Peter talking about flattr in this videopostcast from Spreeblick!

And for everybody who hasn’t yet understood the concept and would like to try it themselves – PUSH THE (Play) BUTTON!